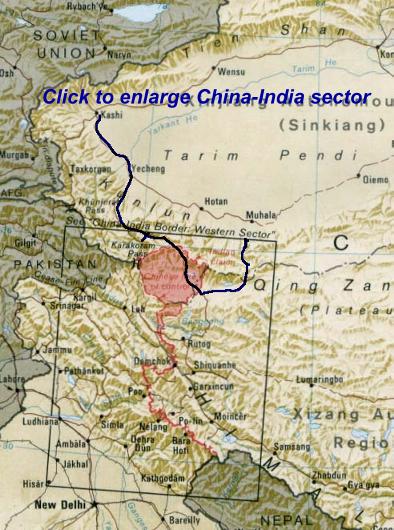 The McMahon line runs through the eastern Himalayas and constitutes a psychological border between India and China. Drawn up and agreed to during by British India and Manchu China, its subsequent repudiation by China made it the major irritant plaguing the relations the two countries. Meanwhile Maoist China built a road through the Aksai Chin plateau that further complicated territorial boundaries. Eventually, India and China fought a border war in 1962 ended with India defeated and Nehru personally humbled.
A G Noorani writes that the dispute over Aksai Chin was really due to India’s unilateral interpretation of a previously undefined border.

The McMahon Line is clearly shown as India’s boundary in the east. But for the entire western sector, right from the Sino-Indo-Afghan trijunction to the Sino-Indo-Nepalese trijunction, the legend reads: ‘Boundary Undefined’.

This legend was used for this sector in all the three maps attached to the two white papers on Indian States published by Patel’s ministry in 1948 and 1950 also. The Aksai Chin belonged to nobody. This was the position when the Panchsheel Agreement was signed on April 29, 1954. But on July 1, 1954, Nehru ordered: “All old maps dealing with the frontier should be… withdrawn… new maps should also not state there is any undemarcated territory… this frontier should be considered a firm and definite one which is not open to discussion with anybody.” Unilateral changes are legally ineffective. [A G Noorani/Hindustan Times]

The problem with Noorani’s analysis is that it assumes negotiations with China can be based purely on legal considerations. That is obviously not the case. For example China’s stance on India’s annexation of Sikkim: as Datta-Ray reveals, the Chinese government did not accept India’s annexation of Sikkim for over two decades in spite of the fact that Sikkim was nowhere near the McMahon line which China first accepted and then unilaterally repudiated.

Earlier, the Chinese had removed Sikkim from the list of independent countries on their official website. The gesture made headlines in India where commentators, echoing official briefings, claimed gleefully that China had also thereby accepted the McMahon Line over which the two countries went to war – disastrously for India – in 1962.

That is not so. The McMahon Line is nowhere near Sikkim. It lies far to the east, linking Bhutan with Myanmar and separating the Indian state of Arunachal Pradesh from Tibet. Sir Henry McMahon, British India’s foreign secretary, drew this 1,360km border on a map at the 1914 Simla Convention attended by British, Tibetan and Chinese delegates, thereby adding 129,500 sq km to India.

The way ahead on the India-China border disputes is to accept ground realities as a basis for reaching a negotiated settlement, an pragmatic approach based on maintaining the status quo, rather than a legal-doctrinal solution which is neither party can enforce on the other.