King Gyanendra is clearly taking his admiration of the ‘Musharraf-model’ a bit too far. He appeared in a military uniform, resplendent with buckles, medals and sashes. He even traded his ceremonal crown or the traditional Nepali cap for a very military peak cap! 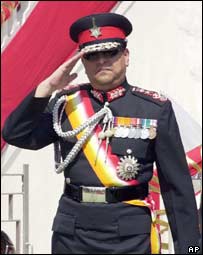 With the get-up looking suspiciously familiar, one cannot help wondering if the uniform, medals and all came as part of the military assistance that Pakistan promised Nepal! With General Musharraf being forced to exchange his uniforms for sherwanis and shalwars, there is plenty of used military equipment that can be sent to Nepal. King Gyanendra of course, had to get into shape first.

5 thoughts on “Nepal confronts its own ‘uniform-issue’”