A geopolitical piece of the franchise

It’s a new Harry Potter book. It’s neither written by J K Rowling nor is it an unapproved fork by some enterprising publishers in Calcutta. It is, in fact, written by scholars of international relations: Daniel Nexon and Iver Neumann have edited a volume titled Harry Potter and international relations. According to a blurb on its publishers’ website, The Daily Prophet calls it ‘a landmark in muggle studies’.

Here are some excerpts from a review that was published in International Affairs: 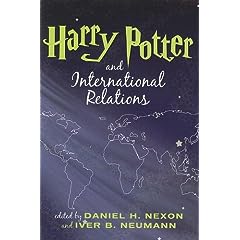 My first advice for readers of this book would be: do not let the title fool you, this is a serious book. I must admit I requested to review this book with a certain amount of faith that I could while away hours reading about why Voldemort is the epitome of realism and how Dumbledore is a brilliant constructivist (though Torbjorn Knutsen disagrees with this assessment in chapter 9). However, it turned out that my appreciation of how International Relations can shed insight into Harry Potterâ€™s tales of magic is not the sole goal of this book. Rather, the book is an exposition of what J. K. Rowlingâ€™s stories about Harry Potter reveal about our social and political world.

Popular culture and politics seek to understand how the global success of Harry Potter has changed economic and political processes. One contributor (Patricia Goff ) does this by tracing the global empire that controls the Harry Potter franchise, Time Warner American Online (AOL). Another chapter (Maia Gemmill and Daniel Nexon) looks at the Christian rightâ€™s response to Harry Potter and its attempts to ban the book in schools and libraries. Popular culture as mirror seeks to illuminate how Harry Potterâ€™s world reflects elements of our own world. This in turn allows us to question our own assumptions and epistemologies. Popular culture as data discusses how cultural values collide with those coming from â€˜outsideâ€™. This is exemplified in a chapter by Ann Towns and Bahar Rumelili which looks at how Harry Potter has been received in Sweden as compared to Turkey. Finally, popular culture as constitutive looks at whether our beliefs represent international politics. Wonderfully illustrative of this is Martin Hallâ€™s chapter on how realism reflects an international relations version of the fantasy genre for western civilization.

The constitutive effects, Neumann and Nexon argue, are the most important ones to trace in locating popular cultureâ€™s impact on politics. So far, they argue, it is too soon to say that Harry Potter has informed or determined politics through popular culture. For example, Harry Potter analogies have not yet seeped into the official speeches of western officials…Best of all, because of the quality of the insights that this book achieves in examining the relationship between culture and international relations, we as International Relations scholars can read Harry Potter and justify it as â€˜researchâ€™. [Sara Davies/IA, available at The Duck of Minerva]

If we have to discuss characters from children’s books, then the most striking realist of them all is a much loved canine.