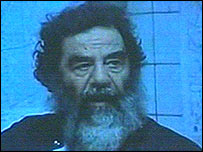 The BBC just reported that Saddam has been captured. This is good news for the Bush re-election campaign. Let’s hope that the search for bin Laden intensifies.

Saddam Hussein never did pose a real global threat. He brutalised his own people, threatened his neighbours and thumbed his nose at the United Nations weapons inspectors. The Baathist ideology, remarkably secular for the region never posed a danger to the world at large. Its great that he’s captured though- at least the US is not discredited in Arab eyes, which would have been all the more dangerous.

Now, catching Osama bin Laden is another story. Having successfully linked fundamentalist ideology to well-funded terrorist operations (or is it the other way around) he poses a much greater threat to the world at large. Al Qaeda is the first truly globalised terrorist organisation. Unless Osama is captured alive and his ideology purged, his brand of terrorism is certain to be the lurk around for a long time. Unlike Saddam though, a lot many powerful people have a lot to lose if he’s captured alive.