None of the three claimants to political power in Nepal have conducted themselves in a manner that instils trust and confidence among the Nepalese people.

King Gyanendra came to power dubiously after a mass murder that killed the previous king, Birendra and almost all his family. Since coming to power the King has dismissed elected prime ministers and dissolved parliament while accusing the political parties of corruption, greed and political & economic mismanagement. Yet the King himself reveals a strong preference for a return to authoritarian monarchy that underlines his attitude towards the elected political leaders. The monarchy was a institution of Nepalese unity and identity – King Gyanendra has done irreparable harm to this most enduring of institutions. His son and heir-apparent, Paras Shah is deeply unpopular due to his wayward ways and the thought of him as a future king is not quite comforting to many Nepalese.

The elected politicans have failed to provide effective governance, and have indulged in political fratricide once too often. In what looks so much like politics in neighbouring India, a seat in parliament is seen as a passport to privilege, power and personal enrichment. After the tragic deaths of King Birendra and his family, the political parties failed to come together in a moment of national distress. Since then, they have lurched from crisis to crisis resulting the current stalemate in the confrontation with the King.

The Maoists have not lost the opportunity to make significant gains as the King and the political parties engage in a fight to the bottom. They control territory and are able to threaten transport and communications to the Kathmandu valley – an economic hub. They have called for ceasefires only to regroup before launching the next offensive. Recognising that there may not be too many takers in the international community for their brand of military Maoism, they have started making overtures to India, a long-time bogey.

Amidst all this, the Nepalese people live under constant fear, deprivation and disillusionment. Tourism and trade have suffered in this forgotten civil war. 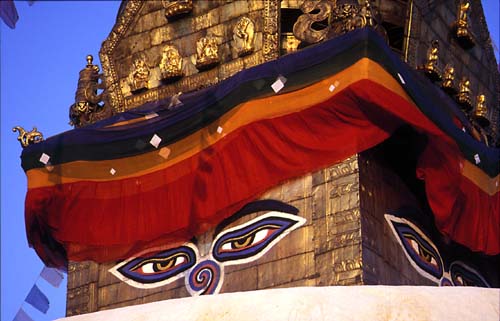 India has traditionally managed its involvement in Nepal while keeping a eye on China’s reaction. It may be time to look at relations with Nepal in the context of democracy and India’s own national security. In spite of traditional closeness, the King of Nepal has always been able to play off India and China against each other. There is no certainty that the current or future King of Nepal will retain any soft-corner for India, and it is unrealistic to expect him to do so. The Maoists, for all their tactical overtures to India remain a bunch of violent terrorists pursuing a dogmatic agenda which makes them comrades in arms with communist China than with democratic India. As C K Lal writes

The Maoists and monarchists may be fighting for their own interests, but their values are essentially the same: primacy of arms, the undisputed supremacy of the ruler, one ideology and an unquestioned chain of command. With such convergence, no wonder monarchists shy away from directly criticising the Maoists.

Politics, however, is about pluralism. In a dynamic society, ideas must compete. A clash of values and divergent views are natural in social systems. Totalitarian despots seek to crush such dissent through intimidation and terror. Authoritarian rulers try to suppress it through a combination of inducement and fear. But both have a common abhorrence for the contest of ideas.

News reports this week that Maoist leaders are in constant touch with the Royal Nepali Army top brass is therefore quite plausible. A temporary truce between the two isn’t as unlikely as it appears. The monarchists and Maoists therefore have a fundamental disagreement with democratic mainstreamers: it is a conflict of values over the principles of governance, a contest between the power of the bullet and ballot. This is an irreconcilable dissonance.
[Nepali Times]

India must intervene on behalf of the Nepalese people, by pressing King Gyanendra to swiftly restore the democratic process. There is a case for a strong military action against the Maoists to destroy what support they get from Indian territory. Indeed, India must step up cooperation with the Nepalese armed forces and provide them with more assistance in combating the Marxist insurgents. If the United Nations can bless such a move, so much the better. Ultimately, India’s interests will be best served if the Nepalese people see India as the one who intervened on their behalf when all other options were exhausted. Given that Nepal is on the brink, that time may have arrived. It is time for India to rethink its Nepal policy.