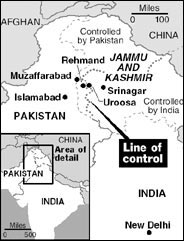 Amy Waldman describes the fence in the New York Times

Good fences make good neighbours: The fence is part of a larger effort by India to buttress its defenses and uses equipment acquired from Israel, France and the United States, including motion sensors, thermal imaging devices and night-vision equipment. It also has allowed the parceling of the cease-fire zone into a grid system so that officers can be held accountable for movement in designated areas…

Senior Indian military officials say that they already see what they called a new “tentativeness” among militants, and that the fence has allowed the army to foil at least four crossing attempts. Militants in Pakistan say that the fence has made crossing the cease-fire line riskier but assert that they have enough men and ammunition already inside Kashmir to sustain the insurgency for years.

Indian officials agree with that assertion, saying that despite a major decline in infiltrations by insurgents compared with last year, there has not been a corresponding drop in violence. [New York Times]

The fence only creates a window of opportunity for India to decimate the terrorists already in Kashmir, and work towards convincing Pakistan to permanently dismantle the jihadi infrastructure in its territory. The security provided by the fence has an expiry date that is not more than a couple of years away at the most.

1 thought on “The Fence”