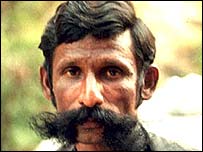 Tamil Nadu police have shot Koose Muniswamy Veerappan dead. One of India’s most wanted criminals has finally been dispatched to meet his maker.

In this age of terrorism and suicide-bombing, Veerappan’s sandalwood-smuggling, banditry and kidnappings almost make him appear like a 19th century highwayman. Like the thugs and dacoits he joins a constellation of past horrors who had their share of fame and notoriety. Towards the fag end of his career, Veerappan did try to diversify into the new business model — terrorism — but could’nt quite find the right sponsors in time.

It has long been surmised that Veerappan enjoyed political patronage that enabled him to elude the law. If so, the manner of his exit leaves no clues about his connections. But it is still good to see him sent off the field by a bullet paid for by the Indian tax-payer. For a time it looked like nature would claim him first.

Patrix holds Veerappan responsible for rescuing at least one Bollywood career; Reuben feels trekking in the beautiful hills in the region just got a lot safer;

Niraj remembers his moushtache and panache; Sepoy finds his persona and myth incredible; The incredulous BBC as usual puts his killing by police within quotes;

Dr Rajkumar is relieved that he can now go to his hometown of Gajanur without having to watch his cashflow position; Anya remembers him for his deceit.

Jagadish questions the absence of the moustaches; while The Brooding Dude reports that someone else has already stepped into them.

8 thoughts on “Ladies and Gentlemen, we got him”