As Washington continued to berate Gen Zia-ul-Haq for taking Pakistan’s nuclear bomb out of the closet, a scapegoat became necessary. To find one, a plane was dispatched to Saudi Arabia…

And an interrupted Haj

1986-87. Gen Zia ul Haq wanted to signal Pakistan’s possession of a nuclear bomb to India. But he had to do so without damaging US President Ronald Reagan’s ability to lie to Congress and the American people. He chose to have The Centrifugist interviewed by Kuldip Nayar.

Subtlety, unfortunately, was not one of A Q Khan’s many vices.

“Mr Nayar, if you ever drive us to the wall, we will use the bomb. You did it to us in East Bengal. We won’t waste time with conventional weapons. We will come straight out with it.” The Observer splashed with it, ‘Pakistan has the A-Bomb’, on 1 March 1987, quoting Khan as saying, ‘What the CIA has been saying about our possessing the bomb is correct. They told us that Pakistan could never produce the bomb and they doubted my capabilities, but they now know we have it.’ (This was exactly the opposite of what Reagan had been declaring to the US Congress every year—Ed)[Adrian Levy & Catherine Scott-Clark, Deception: Pakistan, the United States, and the Secret Trade in Nuclear Weapons]

All hell broke lose. Damage control was attempted. Nayar was labelled, what else, a ‘scummy RAW agent’. Shyam Bhatia, his London colleague, ‘a Hindu dog in the pay of Jerusalem’. Even Pamella Bordes (remember her?) was dragged into the affair. But to no avail. Khan’s admission “continued to fizz and whirr like a firecracker, infuriating Zia, who demanded answers and a scapegoat”.

Khan had suggested Mohammed Farooq—his deputy director in charge of foreign procurement—had been behind a plan to reveal everything to the Indian journalist. But Farooq was not in Pakistan, having decamped to Mecca on haj with his family. 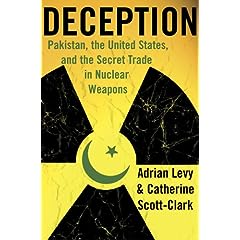 As Washington continued to berate Zia, he got [Lt Gen K M Arif] to call Pakistan International Airlines. Arif demanded a plane and a pilot. They were dispatched, along with a military team, to bring back Mohammed Farooq from Saudi Arabia. ‘But the military team did not know what Farooq looked like. No one had thought to give them a photograph,’ recalled Dr Shafiq, the son of Khan’s aide, Brigadier Sajawal. ‘They dared not fail. They did what all terrified men would have done and seized every Farooq holding a Pakistan passport they could find on haj.’ A planeload of Farooqs was flown back to the Chaklala airbase in Rawalpindi where they were met by Gen Arif and a phalanx of ISI officers. Arif demanded thatt Khan’s deputy step forward and he nervously emerged from a crowd of namesakes…

But in the midst of the chaos, everyone had forgotten to bring back the wives and children of all the Mohammed Farooqs, who were abandoned to make their own way back from the haj. [Levy & Scott-Clark, Deception]

3 thoughts on “Sunday Levity: A planeload of Farooqs”